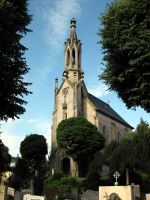 The foundation stone for the planned neo-gothic chapel was laid on Sunday, August 25, 1872, on the name day of the then king, Ludwig II.

On the following Tuesday the 27th of August, the Hammelburg Journal reported:

"Yesterday brought a double celebration to the residents of Hammelburg, which will long remain in their memories. In the early morning hours, a gun salute announced the birthday and name day of our beloved King Ludwig II, which was commenced with High Mass and Te Deum. The royal authorities, the magistrate and the community representatives all attended the festivities. 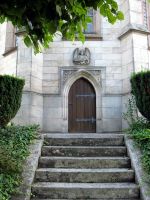 After this uplifting celebration, a procession went to the cemetery to attend the laying of the foundation stone for the new cemetery chapel, which was donated by the munificent Baron Carl von Heß in Kissingen, the only surviving descendant of the honourable von Heß family. The chapel shall also be a family crypt for the Baron and his siblings who are already with God" 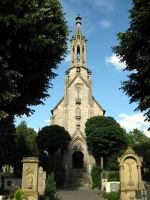 In 1965, the chapel was extensively renovated and supplied with electricity. The costs amounted to approximately 100,000 DM.

In 1997, another 100,000 DM was earmarked for ongoing maintenance works. The main part of the renovation was work on the roof cladding. 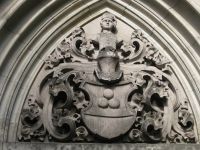 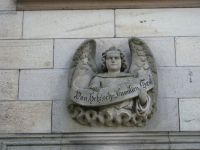 Apprenticeship at the facilities

In the facilities of the von-Hess Foundation, we offer the possibility of Apprenticeship for caregivers, as well as a 12-month internship for nursing professions for young adults.

If we have sparked your interest, please contact us.

The book about the founder and the history of the foundation.

We use cookies on our website. Some of them are essential for the operation of the site, while others help us to improve this site and the user experience (tracking cookies). You can decide for yourself whether you want to allow cookies or not. Please note that if you reject them, you may not be able to use all the functionalities of the site.